West Coast to Transition to Warm/Dry Weather, while the East Coast turns cold and Possible Snowy.

Hope you are having a good holiday week.  Since my last post, there has been a lot of severe weather around the globe, stretching from Newfoundland to Australia. Between Newfoundland’s blizzard of a century that produced 12′ of snow in a 24 hr period of time, to Australia’s Ice/hail storm in Canberra, these weather phenomenon’s are right out of the move, ‘The Day after Tomorrow” Crazy stuff. No doubt, the weather extremes are becoming more volatile, as one minute Australia was burning out of control with 100+ temps and fires, and days later, they are having an hail/ice storm. Needless to say, the weather globally is interesting and deadly at the same time. Moving on, there are some pattern changes in the long range that I am focusing on, that would give the west coast warm/dry weather for the foreseeable future, and the northeast cold, and possible snowy conditions. Lets get into it.

California – It has been an interesting winter so far. With the big storms over SoCal during Xmas and Thanksgiving, most of the cities rain gauges are above normal. San Diego at one point had more rain than Seattle, but I believe it has more rain than some Bay Area cities. Needless to say, after this weekend, I am looking at a very dry/warm period for SoCal, that could extend into the middle of Feb. Although I don’t like to look at the long range models and make a determination one way or another, but it is looking more and more likely that California will have their spring in February. This is nothing unusual as it has happened before. For the ski resorts, they are doing well, as Central & Northern California has had a steady flow of light snow/rain for weeks. As you can see on the graphic below from BA at opensnow.com in Tahoe, the totals are close to average for this time of year: 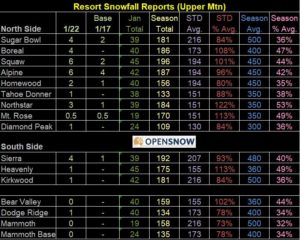 If you are a skier and haven’t signed up for the all access to opensnow.com, I would suggest you do so, as they are a one stop shop for all of the ski resorts in north america. Great site!!

Moving to the long range, below is the Euro Model and the GFS Ensemble through the first week of February As you can see, the west coast ridge of high pressure in orange/Yellow and the cold low pressure from the midwest to the northeast. Depending on where the setup is for the long wave trough in the northeast, will depend on when and if they get any snow. The cold air will be in place, but depends on the jet stream and if the Polar Votex get dislodged from the arctic. 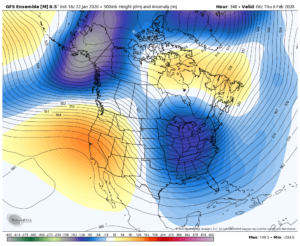 The Euro ensemble model below for the same time period, with the ridge in the west and the trough in the east for the first week in February.

This pattern looks locked in for the next few weeks. Very cold temps east of the Continental divide, whereas the west coast, especially California could see 80’s in the LA basin, and lows around 60. Pretty warm for this time of year. I have discussed meridional flow in past discussions, and this setup is going to take place starting next week. See the graphic below: 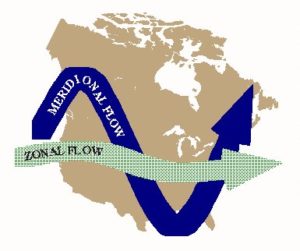 This pattern looks pretty similar to the models above, in which the jet stream ridges over the high pressure ridge, and dives down eastern side of the Continental divide and into the northeast.  Time will tell what the setup will be for snow in the northeast.

The Climate prediction center’s forecast next 8 to 14 day. Looks pretty dry for California and the southwest:

Warm temps for the lower 48. I suspect in the next few days, the CPC will get on board with the other models and start to show the cold air filter in to the Midwest & Northeast. Will there will be a full Polar Vortex in the next few weeks in the northeast???

Long Range Fantasyland – This upcoming pattern looks to be locked in through the middle of February, based on all models and teleconnection patterns. I know these models can change, but I don’t see any chances for rain/snow in California for the next few weeks after this weekend. The Northeast will start to get cool by this time next week through Superbowl weekend. I will be looking at the models and the tele-connection patterns this week to see if there is a chance for the West Coast for the pattern to flip. For those of you in California, enjoy the early spring temps and weather.