Moderate Storm to to Hit California, as New York recovers from a 70 degree Weekend.

Weather Followers – Hope everyone is having a good week and avoiding being sick. Today’s quick discussion will be about the storm that is poised to hit California, and the roller coaster ride of temps/weather in the Northeast. Currently, Seattle is getting nailed by a snow storm and it is creating havoc in the downtown areas, the peninsula and east suburbs. The amount of cold weather and snow is remarkable, as more snow has fallen this winter in Seattle, than has fallen in New York. Interesting stuff.

California – A moderate to strong storm is poised to hit  California overnight through tomorrow night. The jet stream is focused more at Northern California this time around, but Southern California should get some nice totals out of it. One thing is for certain, the Sierra’s could get a few feet out of this system, depending on where most action ends up being. If you are traveling to the Sierra’s, please look at the graphics below, as well as the snow totals from the resorts YTD. 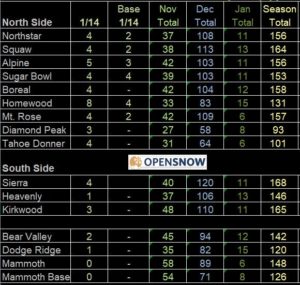 With the storm coming tonight through the weekend, look for these totals to increase….

(NWS Reno/Sacramento warnings and forecast for the pending storm) 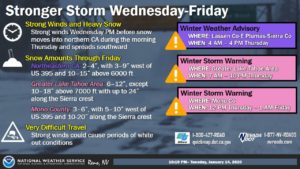 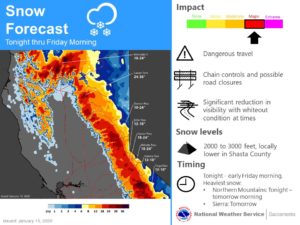 Make sure you visit Caltrans before trying to go through the mountain passes and traveling to the mountains. For SoCal, the storm weakens as it slides south of Pt. Conception, so I would say anywhere from .25″ to .75″ would be in the cards for Thursday/Thursday night, south of Pt. Conception. The further south you go, the less rain you will get. See the graphic below from the NWS SD: 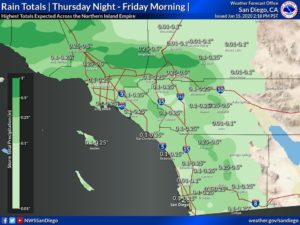 Here are the snow totals for the mountains. Hopefully they can squeeze  a half a foot of snow at Mt High, Snow Valley and Big Bear to increase the snow pack. That would be a nice surprise, which would freshen up the base for these resorts and add to our snow pack. 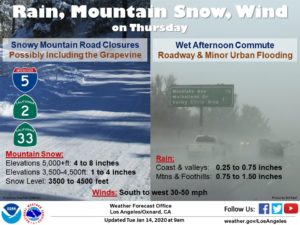 Long Range/Fantasy land – After this weekend, high pressure is building in the West, and low pressure to the East. As you can see below from the 0z Euro,  NY will get some cold air next week, while warm temps filter into the west. After 70 degrees in NY last Sunday, temps will plummet down to the coldest they have felt this year, 30s/20s. See the long range model for next week below: 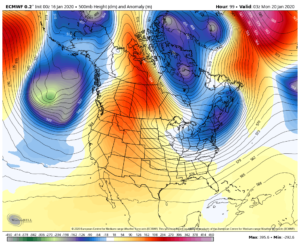 As you can see, high pressure builds into the west next week, and very cold temps in the northeast next week. I don’t see any snow/nor’easters on the horizon, nor do I see a very prolonged period of time for cold air. The PV hasn’t made an appearance this winter so far, but ya never know what next month brings. Case in point,  the last week of January, the pattern flips again, as a long wave trough might sit off the west coast. Below is the GFS ensemble forecast for the last week of January for the pattern flip once again: 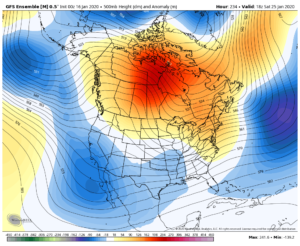 Time will tell what the next few weeks will bring. With all of the teleconnection patterns not favoring major blocking and PV in the lower 48, every week looks to be warm/cold on both coasts for the foreseeable future. I will keep an eye on this, and talk about what February looks like this weekend.