Dry/Warm Weather to Settle in the West….but for how long???

What a week it has been weather wise. The cut-off low system that brought heavy snow and rain to the interior parts of SoCal, is currently pushing off to the east and high winds are coming in behind it for tonight and tomorrow. In this post, I will recap the winter so far in the LA Basin, and SoCal, discuss the short term forecast and look ahead in the long term. Let’s get started:

The storm system that dumped 1 to 2 feet of snow in the SoCal mountains is pushing off to the east. The NWS at LAX put this infographic up some residual snow showers in the mountains and high winds. If you are traveling into the mountains, watch out for heavy winds: 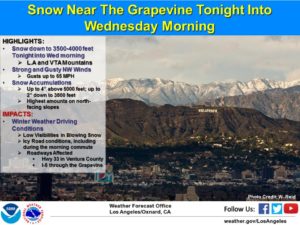 Starting today, SoCal will experience a significant warm up until the end of next week. From the NWS LAX yesterday:

That is an insane record for DTLA. As we move on to the work week in SoCal, it is going to get warmer and warmer. Look at the GFS for this weekend…..do we dare say 80 degrees??

The GEFS Mean Ensembles forecast shows high pressure building into the West through next week, and Cold temps are going to replace war temps in the East. <Click the image below to enlarge> 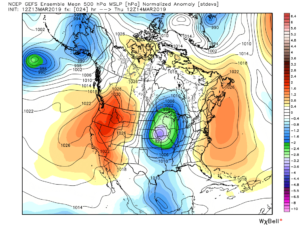 For those that love beach weather and are sick of the cold in CA, this weekend might be your chance to work on your tans! 50’s in the Sierra Nevadas will be on tap this weekend and 70s and 80s in the coastal areas and inland areas. Epic skiing conditions!! As for the Northeast, I don’t any major snow storms on the horizon, but the temps will be cold. I will monitor this throughout the week for my next discussion!

Current Winter Numbers – Below are the snow totals for the Tahoe area, from my buddy BA from Opensnow.com. Check out his snow blog if you haven’t visited his site before. These are impressive numbers: 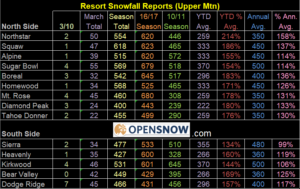 If you are a skier, this week/weekend is going to epic anywhere in the state. I believe Mammoth and Squaw have the higher totals so far this season. What is remarkable about the snow numbers is some resorts in South Tahoe got close to 150″ to 200″ less than the north/crest resorts. Very interesting. However, everyone is above normal which is what is important. So, get out and enjoy it until the pattern changes next week.

LA Rain Totals – DTLA has received 17.99″ of rain since October first, which is well over the average of 14.93″ at the NWS USC/DTLA station. This great news, as March and April are historically active months. Could we get to 20″ for DTLA? Time will tell!! I will have a drought update on my next discussion, as most of CA is out of drought conditions due to the winter we have had so far. This is great news for the reservoirs!!

Long Term Forecast – In my previous discussion and on twitter, I have discussed that there might be a pattern change from  the dry/warm high pressure ridge to an active cooler/wetter pattern towards the end of the month into April. This would have given CA about 2 weeks to thaw/dry out after a very active 2.5+ months.  Well folks, the ridge of high pressure that has given us the warm/dry weather,  is forecasted to break down over the eastern pacific early next week, and this will allow the storms to reload into CA. Below is the CFS v.2 forecast for the week 2 period. Here comes the rain again in the long-range forecast: 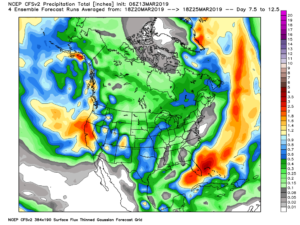 Here is the European EPS Models in the long range: 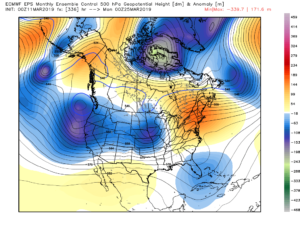 Here is the Long-Long term forecast for April from the Euro EPS – Looks like the active weather through the beginning of the April. 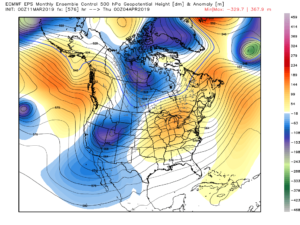 I will update this pattern this weekend, to make sure it doesn’t do a 180 and go dry. However, based on the jet stream patterns this year and the very active MJO (Madden-Julian Oscillation) – I suspect the weather will be active as we transition from winter to spring, through the better part of April. Here are some links on the MJO, to help you understand this phenomenon.  In my opinon, the MJO has been the major force for the weather on the West Coast this winter, especially all over California!

That is all for now. Next discussion later this week. Enjoy the warm weather!!!