SoCal Dries Out after Mother Nature unleashes Massive Mud Slides; While the Northeast braces for another PV!!

What a week it has been weather wise. Between the Bombgensis in the Northeast, to the flash flooding in SoCal, it has been a busy week. The flash flooding that unleashed torrential rains the past two days that took the lives of 17 people in Montecito, is evidence that the weather is becoming more unpredictable and more intense.  Please click the link for updated rain totals for SoCal through today: http://www.wrh.noaa.gov/total_forecast/getprod.php?wfo=lox&pil=RRM&sid=LOX

Moving on, below I will discuss the pattern where the winter is currently, and where I think it will go until the end of the month:

In prior discussion, I have discussed the Polar Vortex (PV) and how it will effect the midwest/northeast most of this winter, while at the same time keep CA and most of the west under high pressure. The flow of the jet stream this season has been a meridional flow type pattern. In meteorology terms,  a meridional flow is a general air flow pattern from north to south, or from south to north, along the Earth’s longitude lines (perpendicular to a zonal flow). Extratropical cyclones in this environment tend to be stronger and move slower. This pattern is responsible for most instances of extreme weather, as not only are storms stronger in this type of flow regime, but temperatures can reach extremes as well, producing heat waves and cold waves depending on the equator-ward or poleward direction of the flow. Below is an illustration of what this flow looks like:

Last season the country experienced Zonal Flow most of the winter, with very little blocking high pressure in the Pacific & Atlantic.  This resulted in record rain fall/snow in NorCal, and had above average temps on the east coast. This year, it is clear which type of pattern we are in. The east coast & midwest has been pounded by Arctic air/snow pretty much since the beginning of December, while the West Coast, especially SoCal, has been hot, dry and windy. After a brief 48 hours of a strong weather system to CA/SoCal, the meridional flow pattern sets up again, with more PV type weather, snow, ice, in the midwest, while the West Coast goes right back to being warm/dry/windy conditions. Case in point the GFS American model of the jet stream forecasted on 1/14/18:

This is a great image that I like to show people what the Jet Stream has been doing pretty much the whole season. Pretty self explanatory where the weather is going. However, after looking at the forecast models, there is a huge pattern change starting the middle of next week to the end of the month, in which the meridional flow pattern flattens out and becomes more zonal. See below: 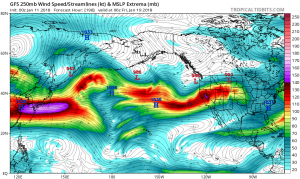 As you can see, by the 18th and 19th of January, the GFS model forecasts the jet stream to slams into CA, bring cooler weather, rain/snow. By the 23rd of January, it hits SoCal.  This pattern will allow the Midwest/Northeast to THAW OUT, after close to 30 days of below freezing temps. The image below is from the European (EC) forecast ensemble models, forecasting cold/wet in the West, and Warm/dry in the east. 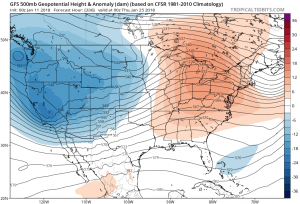 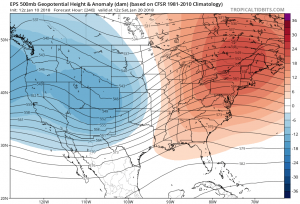 Below is the 26th of January, as the cold/wet pattern still looks to be entrenched on the west coast!

Moving forward, even the Climate Prediction Center is even picking up on the pattern change. Below is their 8-14 forecast:

As you can see above, the pattern is going to change by the middle of next week. With the PNA tellaconnection pattern going negative (see prior posts), I am confidence things will start to get interesting in CA by this time next week. For now, this 7+ day lull in SoCal,  will give time for those in the burn areas to start to prepare and evacuate where they are. Another round of heavy rain will cause more damage and loss of life. This time around, it will be for a prolonged period of time.

For those of you in the Midwest/Northeast, hang in there. After this next round of cold/snowy weather, you will thaw out and it will be our turn on the west coast to get some cold/wet weather.

In the meantime, look for temps in SoCal to be in the 70’s and 80’s by this weekend and the Northeast to be in the 20’s/30’s. Enjoy the weather if you are in SoCal!

For those of who you have just started reading my discussions, I encourage you to look at some of the past posts, as I discuss a variety of weather topics and teleconnection patterns!

Next update later this week……