Quick update this Sunday evening. As the Coronavirus has dominated the news around the country and world, I thought I give some good news on the weather front for those that are in California and like rain and snow. After a very dry 60 days in California, there is some relief coming to SoCal, as some of the rain could be heavy and pose some hydrology issues. Currently, the models are in somewhat good agreement that an upper level low will form off the coast of San Diegoand  will enter into the area Monday night, and will spin up subtropical moisture through Wednesday, possibility Thursday. Some of the energy in the this subtropical fetch will stay in Baja California and San Diego County, which will make those areas have more rain than Orange County and LA County. However, as the upper level low ejects into SoCal on Tuesday, more widespread rain and high elevation will occur. Looking it over on the models, I am thinking the following in inline for the next 72 hours:

SB County, Venture County and LA County: 1″ to 2″ of rain through Wednesday. The further south you go from LA County, there will be more rain through the period. Snow levels are high, around 7k to 8k from Monday night through Tuesday. When the low moves in, it will lower the snow level. See the graphics below from the NWS LAX and SD from the pending rain/snow:

As you can see below, the main subtropical plume is headed to Baja below on this graphic from the NWS SD: 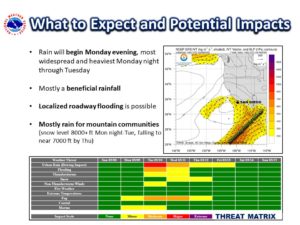 Rain totals though from the NWS through Thursday. Good totals, but the GFS model tonight lowered it a bit due to the plume heading to Baja California. 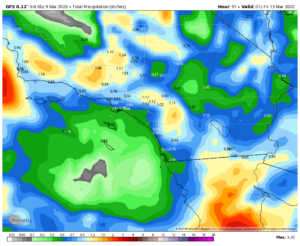 Maybe they will change overnight…..you never know. Here is the NWS’s totals through Thursday. 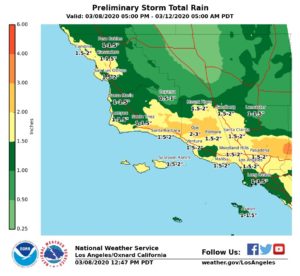 More information on the pending storm from NWS LAX: 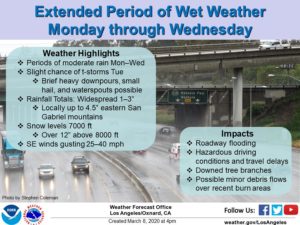 The good news it, SoCal will have most of the week under rain/snow, but NorCal is basically going to be on the northern fringe of this system, and will not get much of it. At the end of the day, it is just isn’t NorCal’s year for weather, as not having any rain/snow in the month of February was very unusual. Maybe something will come at the end of March. See below:

As you can see before on the GEFS Ensemble model through March 18th, low pressure remains over California, so there is continued changes for rain/snow through the extended….. 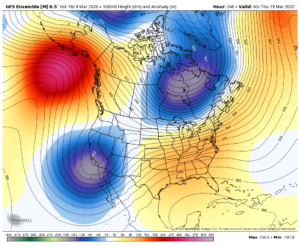 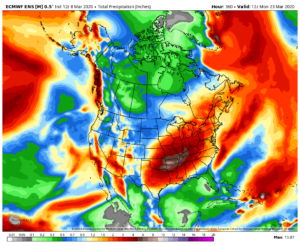 More updates as the storm lands in SoCal Monday night into Tuesday. In additional, for those of you who want an update on the winter in the Northeast, unfortunately, your winter is over. It is going to be 70 degrees in Central Park tomorrow, possibility breaking records. It has been a bust for the Northeast, especially NYC this winter, as warm temps produced rain throughout the winter, with the exception of one or two dustings of snow.  More on that later on my winter recap.