Weather Followers – Hope all of you are well. It has been months since I have posted a discussion, as work, personal life, a large Cyber Security conference my company hosted,  and some travel have gotten in the way. Some of you know I toured Australia in July/August. Although I have some very good friends down under, I haven’t been down there in 10+ years. I have shared some pictures at the end of this discussion, for those of you who are interested in some pictures down under. As for the weather, lets get into it:

– Currently the typical fall weather is starting to show it’s teeth, as an early fall snow storm blanketed the Sierra’s with some good accumulation of snow. Montana was buried in snow as was parts of Utah and Colorado. Even yesterday, the Wasatch mountain range got significant snow fall, enough for some skiers and boarders to climb up the mountains and ski/board down. Although October/September snow is not unusual, the amount of snow is.  As October progressed, the Northeast was warm and the West Coast was cool with the exception of a strong Santa Ana around the 10th of October.  The cool weather that took place of the warm SoCal weather, is currently flipping back to warm/hot as a huge high pressure ridge is taking position over the West Coast, and a trough of low pressure will dig in on the East Coast to produce cooler temps and more rain.  SoCal got a taste of the Santa Ana’s winds last week briefly, but it is back and with a vengeance this week. A meridional flow weather pattern will set up in the eastern pacific, which will give the West Coast, hot/dry/very windy conditions. Fires will occur, so be prepared. Below is a graphic of the current pacific flow pattern. Last year, most of the country and the West Coast experienced Zonal Flow, rather than Meridional Flow. Currently, Meridional flow will rule the pattern for the next 7+ days, as High Pressure will dominate the West and the Midwest/Northeast. 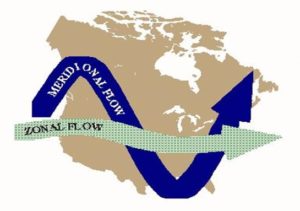 Moving on for this week, you can see the Euro Model through the 24th below. Major high pressure seen below on the West Coast and a trough migrating through the Midwest to the East Coast. 80s and 90s will rule SoCal, while the northeast will get their first taste of good cool fall weather this week. 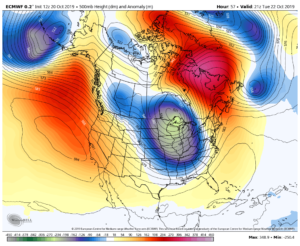 Here is the GFS Model below, showing high pressure on the West Coast through the end of this upcoming week: 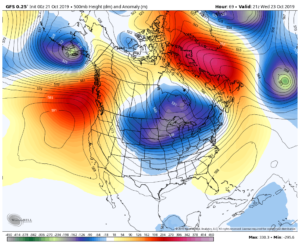 For those of you on the West Coast, prepare for a long week ahead based on the model runs. After we get through this week, there are some changes in the Week 2 climo models. Below is Euro model for next week, as the pattern is flipping again and showing a trough to swing down the west coast shifting the pattern to a cool/rainy/snowy patter for parts of the west coast. This is good news for those in SoCal, as it will be a tough week ahead with the red flag warnings.

The GFS and ensembles are also showing a pattern change, flipping the West Coast trough to an East Coast ridge. Interesting stuff. 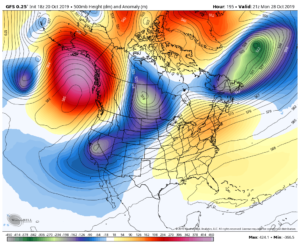 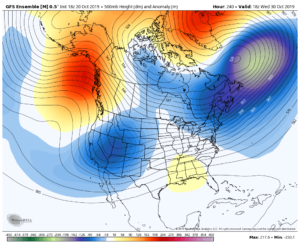 Moving towards the first weekend of November, the CFS is showing a trough in the East and in the West, so the patterns are all over the place. One things is for certain, the West Coast will be under the gun this week: 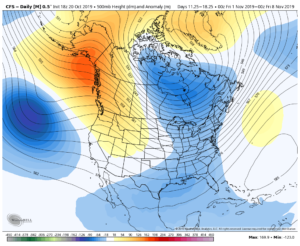 Winter thoughts/Sea Surface Temps (SST’s) – As many of you who have followed my blog/discussions, you know I look to the SST’s for patterns. I discussed on twitter last month that the dreaded Warm Blob was back. As you can see below, the waters are cooling off of the California coast, and the warm water in the eastern pacific has cooled somewhat. Below are the SST’s currently, compared to last year at this time:

Below is the image of the SST’s from last year at this time. As you can see a mild El Nino was brewing, waters off the west coast were below average, and the gulf of Alaska were above. What is interesting is how warm the waters were in the Bearing Straits. This pattern produced record breaking snow/rain fall out West.

Below are the current SST’s, a big difference than last year at this time. Currently, neutral SST’s are at the equator, with cooler waters off the west coast. Warm water is still present in the Eastern pacific, but it is cooling.  I believe that in order for the West Coast to get a normal year of rain/snow, we need the waters to continue too cool. Last year at this time, the SST’s off the West Coast had a head start in the SST’s cooling, but this is something to monitor. If the SST’s cool, that will create less high pressure ridges to occur, and more zonal flow that I discussed earlier in this post. I will keep an eye on it and report how the SST’s progress in the next month.

Australia: Last but not least, below are some pictures from my Australia trip. Simply epic!!! Enjoy. I will post more pictures later this week: 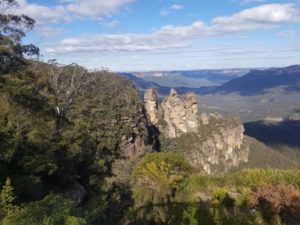 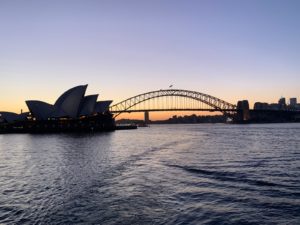 Aerial View of the Sydney Harbor <Click to Enlarge>

I will share more pictures on my next discussion post. Also, for those of you are interested in Cyber Security, here is the link to our website from our conference last week.  www.intouchlive.biz. Complete 180 to weather, but it pays the bills currently. We will be doing two conferences in 2020. One in NY in May, and the other in LA in October. I hope to get some interest from my broadcast meteorologist friends, as data security and privacy will soon be affecting that sector.

Be safe out there this week. Next update on Friday!