Major East Coast Storm Brewing, While the West Coast Could Actually See some Rain/Snow in the next 7 days!!!

Happy New Year!!!! I hope this is a healthy and happy one for all. In my previous discussion on the 29th, I discussed the southern Jet and the Polar Vortex/Northern Jet Stream colliding in the Northeast, in which the meteorologists call it “Bombing Out”. Well, It is happening starting tonight, as the the Polar Vortex and the southern moist Jet stream are going to collide. The barometeric pressure is equivalent to a HURRICANE!!! INSANE!!! Snow fell in Houston, Mississippi, LA, and all in the Southeast. Well, this storm system will collide with the Polar Vortex which is re-loaded and will unleash the coldest temps the Northeast as seen in over 50+ years. After looking briefly on the models this morning, the NAM shows the closest to the the “Benchmark” in the NYC area, whereas the EC is the furthest away from the coast. The GFS is somewhere in the middle. Winter storm warmings/watches are posted everywhere from the NWS. If I had to guess, I would say there will be 6″ to 10″ of snow from NYC North/East ward from the City, with higher accumulations the farther north/east you go. Stay Tuned! I will refine it tonight!

NWS just released this graphic for the upcoming storm: 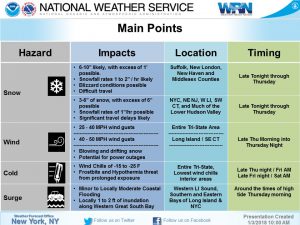 As for the West, persistent Ridge breaks down to allow small storms to break through and dump some rain/snow in Norther Cal. The rain falls apart as it goes below Pt. Conception, but another chance this weekend into next weekend for SoCal is in the cards. More updates later tonight!

Stay warm and get ready for the PV combined with moist weather from the south!!!