Hope everyone is having a great and safe holiday season. Merry Christmas!!!! Currently, we have just less than 1 week left in the year and the weather patterns have behaved pretty much how I have predicted it during this fall, Here is where we currently are:

– Same weather pattern that has been in place in California for weeks, and will persist until the foreseeable future. The Thomas Fire in Ventura, and now in Santa Barbara is not slowing down, and even took a Cal Fireman’s life this past week. It is 65% contained and is the largest wildfire in California history!  So Sad……Very strong Santa Ana winds that have been around for weeks, and will continue throughout the week and into the new year. BONE DRY conditions for southwest California for the foreseeable future. Look at the 6-10 day outlook below:

Same story this winter/fall. PV in the midwest/northeast, while Dry and Hot out west!!

Bone Dry in California and the West Coast!!!I sound like a broken record!!! Drought continues have already begun to take effect in the southwest. No rain has fallen in some areas in over 200+ days. Unreal! For those of you who are looking for snow through the first week of January, See the chart below through 1/10/18: 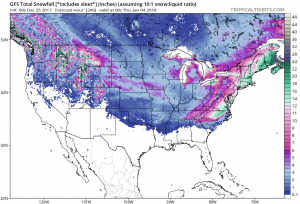 As you can see, barley any snow fall in NorCal and nothing in the southwest…… whereas, the top half of the country will see very large accumulations!! There seems to be a dome over the southwest! This pattern will persist until the 2nd week of January!

More updates later this week. Have a great XMAS!