As the Northeast Experiences an ICE/Sleet Snow Storm, the West Coast and California get ready for the Pineapple Express!! 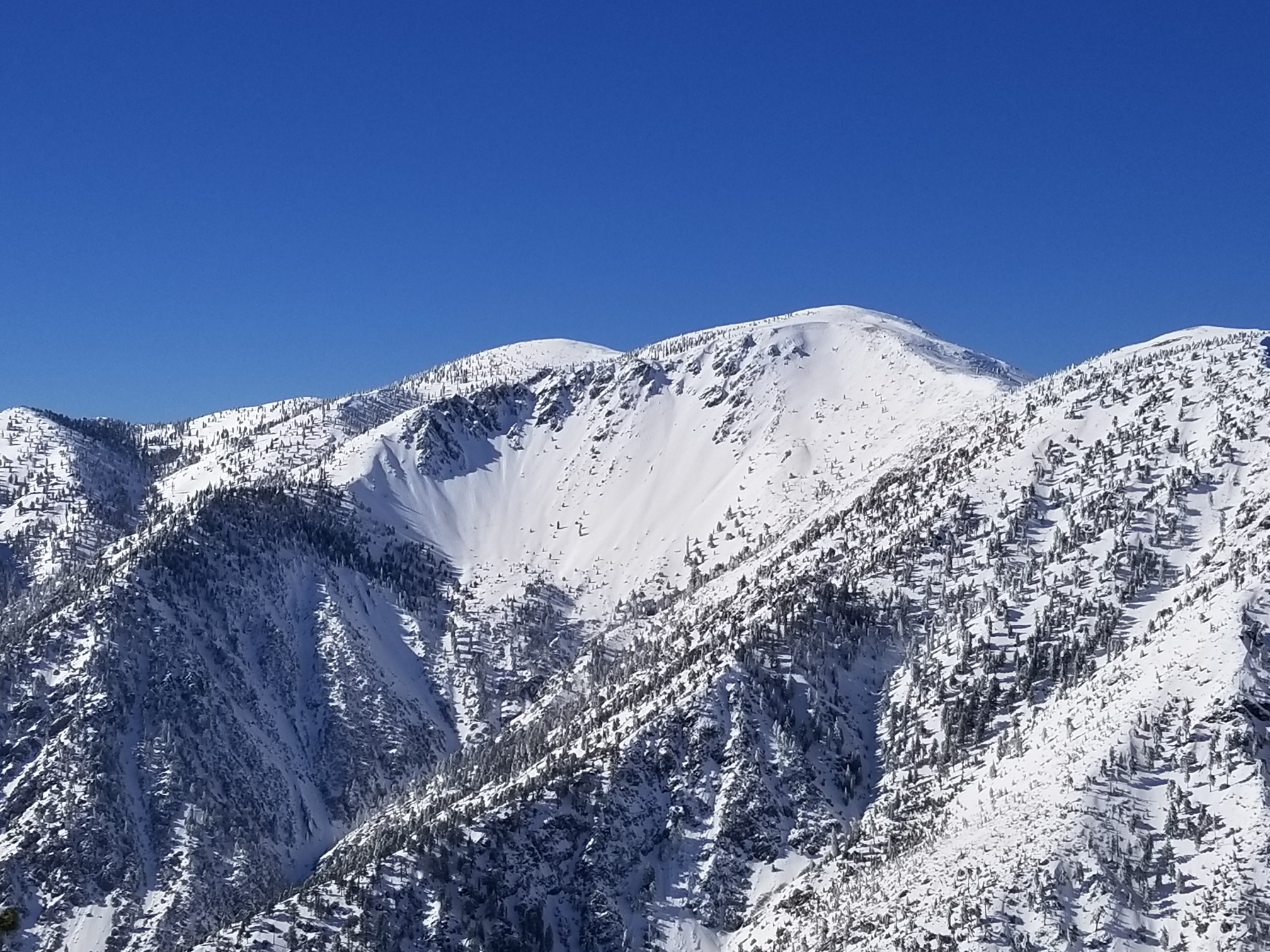 I hope all of you have enjoyed the active weather from coast to coast. Today, the Northeast got a little taste of winter as an Ice/Sleet/Snow storm effected areas from New York through Boston, as the winter starved people living there got something today. Just as it came, it changed over to rain and temps are rising again into the 40s and 50s. I am sure all of them enjoyed it.

As for the West Coast, I discussed on my last post about the AR/Pineapple express forecasted last week to hit California this week… is happening and is right on California’s door steps beginning tonight through this weekend. If you haven’t heard in the news, Hawaii had a massive ‘Kona Low’ storm, that produced massive amounts of  heavy rain, flooding, snow and huge waves. That storm is getting thrusted into the southern branch of the jet stream and will collide with an upper level low pressure system which will merge with the Polar jet stream. This will result in copious amount of rain/high elevation snow for the next 72 hours in California. This is a very complex and complicated system and setup. As of now, Central and Northern California will get the brunt of it, as SoCal will be on the south end of the AR. Anything can change and is subject to change. It is mother nature……we try to understand it, but we can’t control it!! Therefore, be prepared starting tonight for an evolving and fluid 72 hours of changing weather, winds, rain, snow levels. Those of you who are in the burn areas, be prepared for mud flow and debris flow.

Moving on, this illustration below from NOAA/NWS/WRN shows you exactly what is going to take place in the Pacific over the next 72 hours:

Impressive image, as the tropical moisture stream is headed right for California!! Here is another IR photo of the moisture coming into California!!

Impressive!! For those of you who are in SoCal, take a look at the latest NWS LAX projections for rain through Friday: 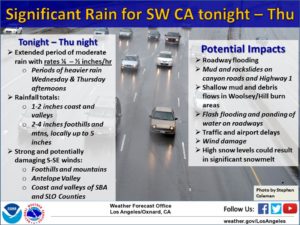 Here is another image showing the rain totals, as this is a bit higher:

That being said, I can show you more models and images, but you get the idea. Due to all the  forecast model disparity, and what is really going to happen, I have broad brushed the totals for this rain event through Friday am:

– Coastal/Valley locations will receive anywhere from 2″ to 6″, and higher amounts in the foothill and mountains

– Snow Levels will be anywhere from 8k’+ and up, but lowering later in the week to resort levels.  Above 8’k there could be 3′ to 6′ of more snow in the Sierra , if not more.  SoCal Mountains might get a foot+ above 8000 feet. Impressive!!

After Thursday night, the forecast is up in the air, as there might be more rain/showers coming throughout the weekend. Models are all over the place after Friday, so anything goes for the weekend. I will post an update on Thursday to update the weekend.

A lot of you have asked me what the long range is and why is it so cold. Well, my friends from the NWS office in Sacramento put this illustration up on their site and I think it is great. Currently, we are in Area 2, headed to Area 3. After this weekend, we are headed to Area 1, which is cold/dry weather for the coastal and valleys, and more inside slider coming from Canada down the interior of the states. Snow showers in the interior valleys and mountains could occur. I suspect this pattern to stay around the West Coast until the end of the month, as we might return to active weather and head to Area 2 in the beginning of March. 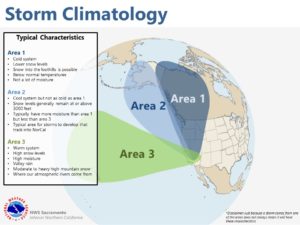 As you can see in the 8-14 day CPC outlook, this just confirms that we are headed to Area 1 in the long term, through the end of the month. I haven’t seen temps like this forecasted this low on the West Coast in a long time.

Tahoe Snow Update – Below is the current snow update for the Tahoe Basin from BA at Opensnow.com I will update this next week after this next storm cycle. What an epic winter so far:

Weather Forecast Information – For those of you want more accurate weather forecasts on their phones and in general, I suggest that you access the NWS for any forecast office. Their website is www.weather.gov   The NWS has the following forecast offices in California for you to get your forecast from, and the android OS has an application for your phone as an app. Here are the NWS Offices in California: 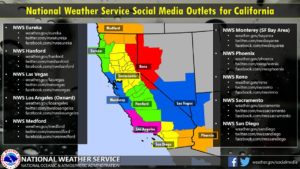 If you don’t have an android, I would recommend home paging the NWS site onto your phone and looking up that way.  Hope this information helps.

Be safe out there.

Next update on Thursday.