RECORD HOT TEMPS IN SOUTHERN CALIFORNIA, WHILE THE NORTHEAST MIGHT GET A HURRICANE!!

Hope everyone has had a great summer. It has been awhile since I have blogged, as work, family and time have gotten in the way. However, I am back for the end of summer/fall, and just in time. I have to tell you, the weather/climate is getting worse by the day. A truly historic week it has been in Texas where Hurricane Harvey rapidly strengthened to a category 4 before hitting the coast just north of Corpus Christi. Not only were the winds devastating, but the real story was the tremendous rainfall that has fallen in the Houston area.  The main cause for this has been an almost complete stagnation of Harvey when it hit landfall a week ago Friday night.  The storm moved only about 100 or so miles inland before completely stalling, then slowly meandering back out to the coast and slowly up toward Houston.  This has allowed an almost continuous onshore flow on the back side of the Eye-Wall to bring tremendous amounts of moisture off the Gulf of Mexico and drop it squarely on the Houston for days on end.  Most locations in the Houston saw 4 to 4-5 FEET of rainfall! That’s about as much water/liquid contained in 400-500″ of snow.  It is truly unreal and historic. In fact, this is now the wettest tropical cyclone in U.S. history, with up to 49″ reported in one location as of Monday/Tuesday of this past week

Obviously, thoughts and prayers are with the people of Houston, as their city and citizens will be in the long haul to get back to normal. Some of the images are hard to comprehend, as this hurricane is unpresented.

Moving on, I’ve seen a number of articles about whether this was caused by climate change, or the Global warming political discussion. A lot of people have engaged that various topic with me personally, and getting my opinion. It is impossible to correlate any one event to climate change, so saying this is a product of climate change is not necessarily accurate.  The main reason for the heavy rains was the slow movement of Harvey,  due to lack of a steering mechanism in the upper atmosphere, sandwiched between two strong high pressure systems…..one to the west over the four corners (which is giving California Record Heat – We will get to that further down the page), and the other was anchored in Louisiana.  It is very questionable to try to tie this to climate change specifically. On the flip side, as the climate shifts and the Earth gets warmer, high pressure systems are becoming more pronounced and stronger. There is no question this is happening, which is part responsible for the huge extremes in weather. This might be the norm moving forward.  The counter-argument would be that this is the first major hurricane to hit the U.S. mainland since 2005 (12 years).  That’s an extremely long time statistically speaking, in a time when we would expect to see more frequent and stronger tropical cyclones, as Earth’s temperature increases on the surface.

As for California, we in the midst of a record breaking heatwave, that is into it’s second week. There are wild fires all over California, with the biggest ones in the Sierra Nevada mountain ranges, near Yosemite, which has been burning for weeks. After looking at the forecast models, I don’t see any break anytime soon.  See the Climate Prediction Centers 8-14 Day forecast. Folks, if you are in the west, we are still in trouble. If you in the Midwest/Northeast, you are experiencing fall like weather in the Summer: 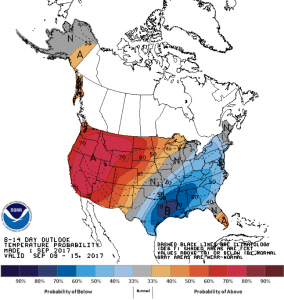 As you can see, the west will continue to bake, with record temps until at the least the middle of September. I don’t see any relief in sight. Look for temps in the inland spots, ranging from 100-115 and temps near the coast from 90 to 105. While the west is baking in record heat, the Midwest/east coast is going to experience fall like temps, with 70’s and 60’s across the regions. Look for this pattern to continue until the middle of the Month!!

I am looking at two Hurricanes that will affect the weather in the next 10 days: 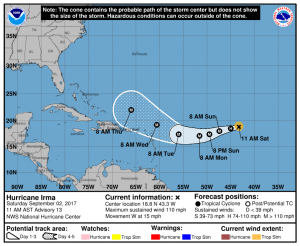 As you can see, it is headed towards the Caribbean islands, then it will get deflected towards the eastern seaboard. Below is the American GFS Forecast Model, on 9/11. It is showing IRMA sitting just off the coast of Virginia going North. For those of you who are on the East Coast, north of Virginia through the NYC area, KEEP AN EYE OUT FOR THIS!! I suspect in the next day or so, the news media will start to pick up on IRMA, and start to track it. This could be a MAJOR HURRICANE TO GO UP THE EAST COAST BY THIS TIME NEXT WEEKEND!!!!

That is all for now Stay cool if you are in the west, and look out for those T-Storms Sunday/Monday in the Southern California region. I will update everyone on Labor day. Stay cool everyone!!!!