Quick update Sunday night. Below I have broken down some quick summaries of the weather patterns for the next week, including Australia, which is currently still in a state of Emergency:

Australia – There was some rain today, as fire conditions laid down a bit today, as cooler temps prevailed and some showers. More humidity has arrived and less winds, so hopefully they could get into a cooler/rainier pattern moving forward to help all of the firemen and woman batting the fires. From what I am told my from mates, it is total apocalyptic in some areas down there.  For those of you who want a good description of what the Indian Ocean Dipole (IOD) is , see the link below from the weather service in Australia: http://bom.gov.au/climate/iod/ This is the main cause for the drought/apocalyptic bush fires in Australia. Currently is it weakening which is good news, which will give everyone down under some relieve. Some of you have asked how my good mates are, and they are fine. They had to evacuate some of their family this past weekend, but they are all safe currently. No loss of structures so far, which is good news too. They just hope they can get back to normal in the next few weeks. Tragic, very tragic.

California/New York – Pattern change is going to effect the US this week, giving the West Coast very below average temps and all of the East Coast above average temps. See the CPC’s 6-10 day forecast below

As you can see, the country is split into cold/hot. For those that are in the Northeast, and waiting for the Polar Vortex and looking for any snow in the long range forecast models, it might be February until you get anything. With all of the teleconnection patterns pointing to an active west coast in the next few weeks, it might hit 60’s in the next 10 days in New York.  Look for more rain, 50’s, and gray skies. Some native New Yorkers have told me the weather in the past month is like Seattle’s. I would agree with them, after only seeing the sun for a few hours the past 10 days I have been in NY.  Crazy stuff.!

For California, especially SoCal, it will be cold but dry for the next 10 days or so. Major cold Santa Ana’s will hit SoCal hard for the next 10 days off and on, bringing the pattern called ‘inside sliders’, which are low pressure systems that dive down the interior of CA/NV into the great basin, bringing limited mountain rain/snow, very cold temps and extreme wind. There is little moisture in these low pressure systems, as it doesn’t have any over the water trajectory, hence it is mostly dry.  I think this pattern will be around until the 20th or so of January, before we get a return to wet/active weather from the pacific. Models are all over the place currently, so not going to post anything until it is concrete in stone and we get model consensus. What I do know is the NWS Los Angeles forecast office has posted this graphic about the wind. Fire danger should be low due to the amount of snow/rain that has fallen this late fall/winter, but the winds will be strong and cold. 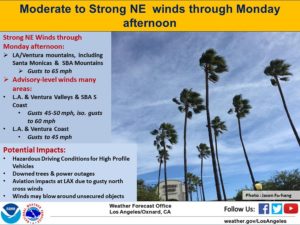 I will post another update later this week, while I am looking for a pattern change.  Be safe and Happy New Year!