After a Short Break, West Coast/CA Prepares for another Cycle of Wet Weather!!

Hope you all had a good weekend. What a month it has been for the weather in CA, and especially SoCal, as one of the strongest Storm cycles in the past 5 to 10 years dumped feet of snow in SoCal, 10′-15′ in the Sierra’s and even had snow falling down to 500′ to 1000′ in the SoCal areas, even in the foothills around LA. I even heard reports of snow in Santa Monica and Malibu. Nuts. It is ironic and pretty comical that parts of the metro Las Vegas area have had more snow fall this winter season than New York and Boston combined. Never thought I ever write about that. Unreal!! Moving forward, what is next? Let’s take a look below.

Short Term – Currently, the West Coast from Seattle down to San Diego have experienced heavy rain/snow and bitter cold temps for about the last 30 days. A lot of that has had to do with the position of the ridge axis in the Eastern Pacific, as well as the teleconnection patterns influencing the northern Jet stream, merging it in with the southern jet stream. The southern jet stream has been very active this winter and hasn’t allowed the east coast trough to anchor in around the Hudson Bay, and create blocking in the pacific.  One reason could be the a weak El Nino or a neutral El Nino in the pacific. Another could be the MJO. Here is an article about the MJO and what it is and how it can effect the west coast weather: https://www.climate.gov/news-features/blogs/enso/madden-julian-oscillation-has-been-active-so-far-winter-here-why-it-matters

I will discuss it more on my next post as it is an interesting phenomenon which has been partially responsible for the weather on the West Coast this winter. Moving into March, I don’t see any blocking forming for the first two weeks. As in my previous posts, the ridge axis has moved out to about 160W, but this time it is a bit lower and is forming another AR or ‘Pineapple Express’ aimed at Northern California. Here is the GFS 0Z model run for the West Coast and the 12Z Euro Run for the West Coast through March 7th.

GFS 0Z Run – Look at Northern California getting nailed for the next 7 days!! 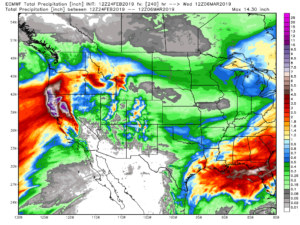 Depending on where the snow levels set up, there could be anywhere from an additional 3′ to 6′ or more in the Sierra’s….they just can’t catch a break up there. Further evidence is shown by the CFSv.2 from the NOAA. Some people think this is a fake model but it has been a fairly accurate model this winter season. See below, as it is forecasting another AR to hit California again, and maybe take aim at SoCal too during the 2nd week of March: 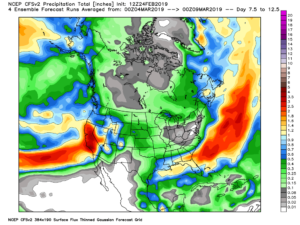 Further evidence that the first two weeks are going to active in West Coast is the CPC 6 to 10 forecast today:

As you can see, more rain/below temps are forecasted for the next week or so. Who knows, even NYC or Boston might get some snow during this time frame.

SoCal Weather – Below is the NWS LAX forecast this week. 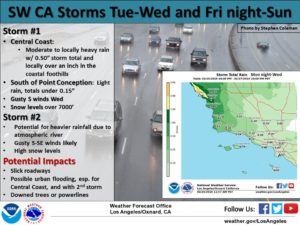 Some people have asked me about the weather this coming weekend. I believe we need a day or two of model runs to determine how much of the AR sags down to SoCal, south of Pt. Conception. Time will tell! I will post an updated discussion tomorrow or Tuesday for the weekend.

Sierra Snow Update – Below is the Tahoe snow update though Yesterday,  from my buddy BA at Opensnow.com:

One thing you will notice is the 16/17 years, Jan and Feb were epic and then the storm cycle cut off until the beginning of April. I don’t see that happening for March, as the first two weeks look very active!! This year could break the 800″ record……wouldn’t that be something.

Local Mountain in SoCal have bases of 76″-114″. I haven’t seen these totals in a long, long time. I hope the snow levels drop down in the next series of storms to hi SoCal, and HWY 18 is fixed so people get up and down the mountain and enjoy all the snow.

Next Update tomorrow night or Tuesday, to discuss the MJO and the upcoming AR’s!