Storms Lined up on the West Coast Starting Friday while the Northeast Patiently Waits for their First Major Storm this Winter!!

Weather Followers – wanted to give everyone an update, from coast to coast.  Below I am breaking down the pending Storms on the West Coast to the East Coast. Lets get into it:

West Coast – By now, you have heard from the TV readers about the series of storms that are currently headed to the West Coast and California. With a very strong Eastern Asian Pacific Jet aimed at CA/West Coast, the active storm train has commenced today in NorCal, and the Central Coast. Come Friday, SoCal will get into the action, as storms will make it down to SoCal. Due to a very strong high pressure over ID/MT, some of these storms that have hit the West Coast have split, with some energy going to NorCal, and a weak cold front hitting SoCal. However, things will change with Storm #1, as it will start to break down the ridge of high pressure, which will allow the Jet stream to slam in CA starting Friday. As of now, here are estimates of what to expect in SoCal starting Friday:

Storm #1 – Friday afternoon to Saturday midday. As of now, amounts for SoCal will range from .50″ to “1.00, with higher amounts in the foothills and mountain. Snow level is 6K ft, with 2″ to 4” are possible.

Storm #2 – Sometime Sunday to Monday. Details are sketchy due to the models not being consistent, but by Friday hopefully there will be some clarity.

Storm #3 – Monday through Friday – the GFS and the EC show very heavy rain off and on throughout these days. Currently, it is hard to pinpoint exactly when and how much rain/snow will fall since it is 5 to 7 days out, but will know more by this weekend.

Models – See below for the amount of rain that is forecasted to fall by the GFS and the European models through January 18th: 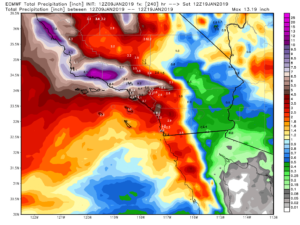 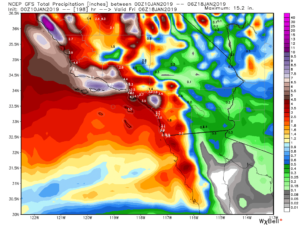 As you can see on both models runs, there is copious amounts of rain/snow forecasted on both models to hit SoCal, so something big is brewing. As I discussed on Monday, if these models verify, there is going to serious hydrological issues in SoCal starting Friday and the burn scar areas will be under the gun for major mudslides. For those of you who are in these areas, be prepared!

Below is the CPC’s 6-10 day forecast is showing heavy amount of rain/snow for the West Coast!

Will Update on Friday with more information about next week’s train of storms poised to hit California.

East Coast/Northeast – Things will be changing this weekend, as a coastal low will be trying to make it north to the NYC-Tri state area, but models currently are showing it falling short of the major snow benchmark. Time will tell if the two jet streams converge together and move the coastal low north enough to give NYC some much needed snow. Currently, some models have it hitting S. Jersey on Sunday. However, there will be many more chances of snow for the northeast, as the pattern is going to be changing in North American come the MLK weekend through the begging of February. This is good news as the natives are getting restless, as this has been a mild/snowless winter so far.

Pattern Change Long Range Forecast –  I discussed the major pattern change forecasted to begin MLK weekend on Monday. Well, models runs in the long range are still on target for that.  Major teleconnection patterns are going to flip, with the EPO changing to negative, the PNA changing to positive and the NAO flipping to positive. Here is an explanation of what that means if you are new to my discussions:

For those of you in the Northeast, be prepared!!! You will be getting some snow storms, some could be major in the next week or so.

Next Update on Friday! Stay Dry!