Hope most of you are surviving the heat and crazy weather around the country. Currently, Cali is literally on fire, as there are over 10+ active fires currently. I know there is not much to talk about weather wise except for excessive heat, dry weather and fires everywhere….. but unfortunately we are in pattern/climate change in which oppressive heat is going to be the norm moving forward.  I don’t want to sound pessimistic,  or depressing, but I am frustrated where we are headed….. we are all. We are tired of seeing 105+ heat daily, fires creating devastation, loss of life, etc. The climate is changing and getting worse daily.  I have always been the proponent that mankind plays a role in the acceleration of climate change, but also there is a lot we still don’t know about mother nature. Therefore, it is a mix bagged from where I am sitting without getting political. It takes two to tango!!  In any case, I will get off my soap box….and give you a discussion as to where things are headed from my point of view.

One of the reasons for the heat in SoCal, is the sea surface temps have increased to the point that some spots off of San Diego are over 80 degrees…..breaking 100+ year records. This increases the humidity, makes the marine layer disappear,  and drives the continental high pressure ridge  close to the NV/CA area, giving SoCal the oppressive heat, fires, wind, and 100+ degree temps everywhere. Below are the current SST’s Globally…….notice the area off of  the SoCal coast……it is very hot!!!!

Global SST’s….Notice the area of SoCal and Baja CA!!! Very hot water!!! Will there be a hurricane in September up the Baja CA Coast??? The water is hot off New England, as I feel the heat/humidity will increase throughout the month.

Moving forward, I don’t see much changing anywhere in the US, especially in the Southwest, anytime soon. Below is a graphic from the CFS for the month of September….which forecasts more of the oppressive heat, mostly in the lower 48….insane!!

Folks – This is just outright awful!!! Look at Cali and the Southwest. Again, the new norm in temps is going to be 10-15 degrees above the old norm. Therefore, if you live in Woodland Hills, CA and the average July temp is 95, the new norm is 105-110. Unfortunately , that is where we are at and where we are headed. Whereas, NY had a mild 2nd half of July, only to come into August with a heat wave, severe T-Storms, humidity and one tornado in Queens. As I have stated, the weather is coming more and more volatile  each week.!!!

CPC 8-14 Day Forecast……not much is changing as the heat is still on for most of the country!!

Some of you have asked me what the winter is going to be like. If you look at the SST Global image above you can see El Nino is not forming as quickly as NOAA had predicted last month. Therefore, everything is up in the air currently. If an El Nino  does form, it will be weak in nature which is a basically a Modoki El Nino, which will give the West Coast, dry, hot and windy weather, and the Northeast will get pounded with snow/sleet/Polar Vortex etc. See the images below from NOAA regarding the two different scenarios.. Very distinct differences….. 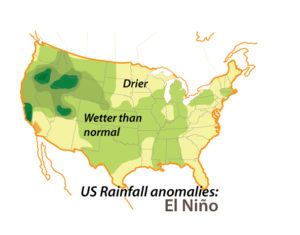 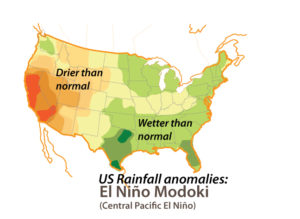 Moving forward, I hope I didn’t depress all of you. That is not my intention….as I .just want to discuss my thoughts on where we are. Pray that the El Nino is not of the Modoki variety, so we can at least have some rain fall and cool temps out west. For those out in the fire zones battling them, be safe and good luck. The season is not even half way done from where I am sitting!!! For those of you who want to follow me on Twitter, my handle it @realwxweather. I post more smaller discussions on there and I am more active between blog posts….so check it out.

More updates this weekend!! Be safe and stay cool.