Winter in the West/Summer in the East???? Major Hemisphere Changes are Afoot!!!!

Hope everyone is having a good Presidents day holiday. Although it has been a few weeks since I have published a weather discussion, I am fairly active on twitter on a regular basis. Feel free to join me on there if you are on twitter: @realexforecast

After a record dry/warm winter in CA, there are some things that are going to change in the long range forecast that will impact CA with some rain/snow in March. Will it be enough of a March Miracle??? Lets find out:

Currently, the weather pattern in the CONUS (Lower 48) is going through a transition period, as the warm/dry summer like winter that has gripped CA this winter, has ended abruptly.  It was replaced by a cold low pressure system  traveling from the north to south,  down the middle of the state, called an inside slider (you might have heard the news readers on TV call it this) The good news with this system is it is very cold, so if any precipitation falls it will be snow in the mountains. The bad news; VERY HIGH WINDS, most of the limited amount of moisture has fallen in the mountains, as the low pressure travels over land, it limits the moisture content that can fall. If the storm comes in off of the ocean, it’s over the water trajectory will allow the weather system to hold more moisture….. hence, more rain/snow will fall. We have had only one system this winter (The Rogue Storm that produced the Montecito mudslides) that had some over-water trajectory, but this system was more cut-off the main jet stream, which pulled tropical moisture from the south and delivered it to SoCal. This winter, CA has lived off of these “Inside Sliders”, as most of the record low snow pack has been from numerous “inside Sliders”.  Look for most of the West Coast/CA to be 10 to 15 degrees below normal for the next two weeks. That means 20s to 30s for highs in the mountains, to 50s-60s in the The Valleys/Costal Areas. The lows will be frigid, as 30s in the Valleys/coastal areas to around 0 to 10 in the mountains. See weather forecast below from the NWS in SoCal: 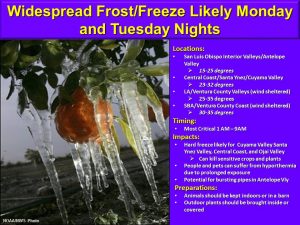 As you can see, SoCal will be Frigid this week!  Look for another inside slider around Thursday/Friday, with cold temps, wind, and snow possible in the mountains.  Temps will moderate this weekend back to near normal, as weak high pressure comes back into play. After that, temps will get cold again next week as more Arctic air and precipitation will enter CA.

After this weekend, things get interested for the last week of February, and 1st week of March. As you can see below, the 8-14 Temp/precipitation forecasts from the CPC:

As you can see, warm in the Midwest/East Coast, Cold on the West Coast. There is even green in the image above for CA, meaning rain/snow is in the forecast through the 5th of March. Furthermore, look at the combined snow forecast for the Western Part of the US through March 5th. This is great news as we need it!!!! 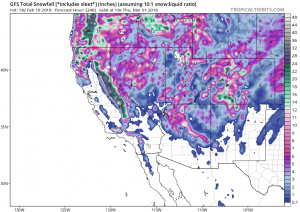 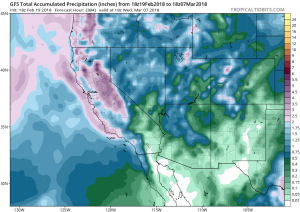 (Click to Enlarge for the cumulative rain forecast for the next two weeks) – Yes, there is no bubble dome over SoCal……..there is actually Purple and green!!!!

The main message is, if you live in CA, get ready for Winter. Significant rain could be expected from 2/27 through 3/5 in California and in So Cal. If you are in the burn areas, PREPARE NOW!!!  For those trying to understand why the pattern is changing after a winter that has been bone dry and hot, it all has to do with teleconnection patterns and SST (Sea Surface Temps) in the pacific. Without getting technical tonight,  the high pressure ridge axis which as been parked in the eastern pacific off the West coast,  is in the process of retrograding eastward to 160W in the pacific, which is a benchmark for CA to get rain/snow, and the East Coast to warm up. That process is part of the PNA pattern ( I discuss this in prior posts if you want to see my archive). When it flips to negative, the west coast is likely to get low pressure, cool/wet weather, and the east coast warm/dry weather. That is what is going to happen through at least March 5th or 6th. We will see what happens after that period, and if the high pressure ridge axis parks itself at 160W, or it moves further east, which would cut off the storms headed into CA.

In the meantime, stay warm in CA, as it will be colder in LA and SF than in New York City this week. Unreal!!!

Next update in a few days!