Midwest/East Coast Blasted by PV, while California enjoys 80 Degree Weather!!!! Changes on the Way as the Hemisphere Pattern Might Flip to a -PNA! 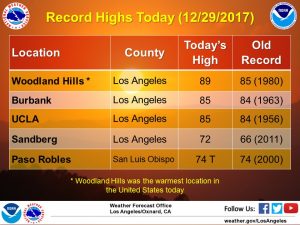 I hope everyone is enjoying the the Polar Vortex in the midwest and northeast. SoCal has been under dry and 80 degree weather, fires, no rain for pretty much the last 120+ days……. while the Midwest/Northeast has been pounded by heavy snow, Arctic temps. What a difference.  I am surprised that there is not as much snow in the northeast, as the amount of snow that has occured has been concentrated more in the midwest, as the southern Jet Stream and the Northern Jet Stream are completely out of phase with each other. Case in point, Erie, PA gets pounded by snow, but NYC, Philly and Boston barley get anything.  It is interested to a degree, and worth watching if the two jet streams remain out of phase with each other the remainder of the winter. However, it might be to cold to snow to fall, as record cold temps have fallen all over the northeast, as they have fallen in SoCal for hot/high temps. Crazy stuff!!!

So, what does January have in store? Well, I see some changes, as there is a very good chance that a trend of strengthening tropical weather over the Indian Ocean, i.e., the MJO ( Click here for explanation: https://en.wikipedia.org/wiki/Madden%E2%80%93Julian_oscillation ) is expected to enter PHASE 1, which will set in motion a change in the mid -latitude hemispheric pattern.

Look at the Green line and the yellow projected path. For Storms to get to CA, we want the MJO to go into sections 1 thru 3. If you can see, the MJO has been around 4 through 8 for most of the past few months, which gives the West Coast high pressure, and Midwest/Northeast Low pressure, cold and troughs. This change will bring precipitation back into the west coast and California as early as next Wednesday, but more likely the following week. This change will allow the big Eastern Trough (PV) to be ejected into the Atlantic Ocean, and allow the blocking arctic high pressure to go bye-bye. This will open up the the long wave trough in the pacific and weakening or expunge the west coast high pressure ridge, which has dominated California for mostly the last 2 to 3 monthly. Ultimately,  stormy weather to return to California, which we desperately need. The CPC has picked up on the pattern changes coming into California, but keeps it warm until the middle of January. See below:

This is the 8-14 day Forecast from the CPC. They are still forecasting below average temps east of the Continental Divide, and warm in the west, but at least there is green out West!!! There might be hope!!!!. This pattern change is subject to change, but right now, the PNA index is falling to negative by next week, which also is a a good teleconnection sign that change is on the way!!!!

In my next post, I will discuss the SST (Sea-Surface Temps) and how they are the engine that makes weather go. Since this is a LA Nina year, and La Nina is currently weakening due to the MJO activity in the Indian Ocean, one has to wonder if California will get a late winter this year, with good rains/snow in Feb through March? For those of you in the burn areas in California, be prepared for mud slides, as mother nature is in control, and we can only speculate what she might do next! I suspect she is not done with CA after the fires, drought, heat and wind!!!