Winter Storm Watch in the Sierra Nevada’s….then Warm on the West Coast and Cold on the East Coast for Thanksgiving week!!

I have been watching this storm develop on the forecast models over a week ago, but it’s only in the past 36 hours or so that it has become stronger…hence a pretty decent storm for many areas near the I-80 corridor (including the Bay Area, Sacramento region, and even Lake Tahoe). This is mainly a Northern/Central California storm and SoCal will get a few pizzles from it.

A decent atmospheric river (AR) is currently aimed the top 1/3 of California , which will (slowly) sweep down the coast later tonight and fizzle out around Pt. Conception. In addition to the (AR) that is aimed at the tip 1/3 of California, a small surface low is expected to spin up later tonight,  enhancing the amount of rain and snow that will effect NorCal. The burn areas will be effected by some flash flooding, so those areas will have to be in tune with NWS alerts

Rain fall will be anywhere from 1″ to 3″ from the Bay area northward, with up to 2′ to 4′ of snow in the Sierra Nevada Mountain ranges. The key is the snow levels, which have been all over the place on each model run. Currently the snow levels are lower the further north you go. For example, the south side of Lake Tahoe is roughly around 7500 feet, whereas the north side of I-80 is around 6000 feet. Mammoth is close to 8000′.   That being said, look for 2 to 4 feet of Sierra cement above 8000 through Friday, as the snow level lowers as the cold air filters in after the initial front pushes through by tomorrow am. This is a good start to a somewhat late start to the rainy/snowy season.

For those in SoCal, it is going to a tough winter if you like rainy conditions. As NorCal get their first decent storm of the season, SoCal will get a few pizzles as I call it, which is a mixture of mist & light rain…….which is nothing to write home about. This will be the story of the year, as SoCal will be on the tail end of every single storm that hits the state of California this winter season. This is the start of it so be prepared. At least NorCal will get some good rain in the areas that have been ravaged by the wildfires through Saturday.

Your Thanksgiving Day Forecast, via Tropical Tidbits, the NCEP GFS Model for next week:

North Pacific Forecast GFS Model for Thanksgiving. Notice the High Pressure Ridge over the Aleutian Islands, which will give the West Coast very warm temps and the East Coast Cold Temps- 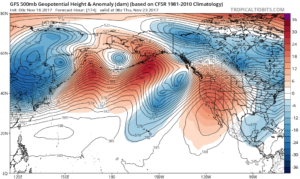 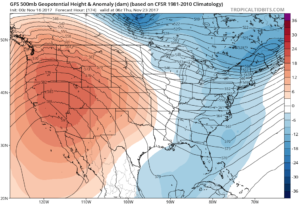 As you can see in the above graphics, a strong & persistent blocking ridge will continue over the North Pacific near Alaska, which will give the West Coast very warm temps, and the East Coast cold temps. The models have been bouncing back and forth regarding the potential for a second system next week on the West Coast, which would effect NorCal.  However, the more recent runs of the GFS model show it less and less likely to make an impact. The current patterns stems from the persistence of a very high amplitude blocking ridge over the North Pacific over the past 30-40 days (See graphic above), and most forecasts suggest this will persist in some shape or form for at least another 2-3 weeks (See Above Image). As I have discussed before in recent posts, the ridging (warm and dry) on the West Coast to deep troughing (cold and wet) on the East Coast as been the pattern for the last few weeks.  This will continue for the next 2 weeks,  as the “warm and dry ridging” still appears to be the norm in SoCal, as temps next week could approach 90 degrees in the valleys and desert.  Yes, you heard me correctly. LA might be approaching 90 degrees for Thanksgiving next week. On the flip side, I don’t see any major storms on the horizon on the East Coast, however, the temps will be far below normal for this time as year, as this might be one of the coldest winters on record for the Northeast. Case in point, just one week ago today, Central Park broke a 103 year record low temps of 26.

More later this week on the patten for week two, but next week will feel like summer in SoCal!!! Enjoy!

Updating discussion for today. Much needed storm headed for Northern/Central California tomorrow through Saturday. 2′ to 4′ feed of snow above 8,000 feet.