Another record-breaking hot day across southwest CA today, with 9  records broken, including Downtown Los Angeles which broke a 108  year old record when they reached 104 degrees. The old record was 99 degrees set in 1909. Other notable records included 104 at LAX, 105 at Long Beach, 103 at Burbank, and 101 at UCLA. Interestingly enough, the high of 108 degrees at San Luis Obispo Airport this afternoon tied for the Nations`s high temperature today with Miramar NAS in the San Diego Area.  Below are the records that fell today, including 101 at first pitch for the Dodger-Astros WS Game: 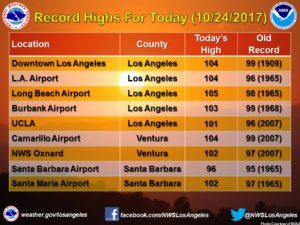 Not much change tomorrow, as a massive high pressure is still anchored off the west coast. After looking over the model guidance tonight, I don’t see much of a pattern change until maybe the first week of November. Even more depressing news for those who are sick of the heat in the west, is the November forecast from the CFSv2 model, from NOAA. It shows more heat through the end of November. See below:

As you can see, the west is forecasted to be very hot for the month of November. This is subject to change of course, but one thing is certain………this will be a very late start to the snow/ski season out west. Again, my discussion yesterday on the SST’s are the telling factor for this upcoming winter. More later this week……

Sign up for email alerts at the top of the page!