I am going focus the attention to California for the time being, as what is about to hit California, especially Southern California, hasn’t been seen in 10 to 20 years. I am sure all of you have heard the media talking about the storm. However, what I have just seen with the recent forecast models, hasn’t been seen in a long, long time. Here is a quick breakdown as of today for the next 5 day period:

Tuesday thru Thursday – Warm with offshore flow today and tomorrow, as it will be short lived. Today and tomorrow are the days to do what you need to do to prepare. If you have leaks and water damage, tarp it up now. I expect the temps in the LA area to be close to 80 degrees tomorrow (WED), especially in the Valleys. By Wednesday night, a major change in the weather pattern will begin on Thursday, as a HUGE broad trough of low pressure over the entire eastern pacific will begin to head south towards California, beginning on Thursday. As the front works its way down the CA coast on Thursday, Northern California will get the brunt of the storm, dropping 1”-2” inches near Sacramento and about a foot or so of snow above 7500’K feet. This is not a really cold storm, so snow levels again will be high. This will put the folks in the Oroville area in the bullseye of more severe weather, as the dam tries to hold the increased rain/runoff from high snow levels, and heavy rain. Look for wide spread urban and river flooding, so check the NWS in Sacramento if you want to follow this situation up there.

Southern California will get the tail end of the storm Thursday during the day with light to sometimes moderate rain, but no flood concerns. Expect anywhere from .25” to .75” of rain south of Point conception. In fact, the front washes out south of pt. conception on Thursday as it slides down the coast, so those numbers might be overdone!! I will update as the event gets close.

By Friday, the second in a series of storms will approach Southern California. Folks, get your seat belts on, as those in SOUTHERN CALIFORNIA will experience a huge Atmosphere river (AR)….aimed at SBA/VTU/LA counties. Rain like this hasn’t fallen in over 10+ years. A strong surface low pressure developing WNW of Los Angeles, will help to intensify the AR, bringing with it heavy rain and up to 60 MPH winds. With the upper jet digging from North to South, it will take on a negative tilt (it will slow down), and sit over LA area from later Friday afternoon until Saturday morning. Forecast models project a 12 to 16 hr. event, with heavy to moderate rain event. BE PREPARED!!!!!  Look at the GFS 12Z forecast model for 4 PM Friday: 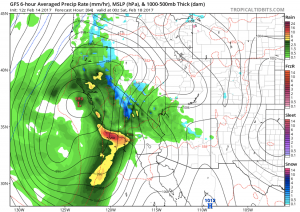 As you can see, the LA area is in the bulls-eye for a change for some serious rain. Since the weather forecast models change every 6 hours, there is a inherent amount of uncertainty where the bulls-eye is, and what timing and the amounts. However, as we get closer to the event, things will be more certain. If I had to guess, I would expect the So Cal area to get anywhere from 4″-8″ of rain from Thursday night through Saturday night. That is an insane amount of rain. Snow levels will be north of 8K feet on Friday, lowering to around 6K feet by Saturday night, so some of the local so cal mountains might get rain then snow.

Saturday – I am forecasting rain in the AM, to scattered showers throughout the day, clearing up Saturday night

Sunday – Looks to be the best day, with maybe some residual scattered showers, but overall Sunny

Monday – the GFS Model is forecasting another moderate rain storm, but that is 7 days out. More on that later!

Next update tonight!!! Be prepared!!!