Winter Returns in the Northeast, as the West Coast Braces for more Rain/Snow

Winter Returns in the Northeast, as the West Coast Braces for more Rain/Snow. What a week it has been in the country. More record rain/snow fall has fallen in California, as some of the mountains are inundated with Rain/Snow. At the same time, NYC got hit with 10”-14” inches of wet snow, which crippled the city, which took about 36 hours to get back to normal. Yours truly was in the city at a conference, and below are the pictures (Click to enlarge) from the snow from Times Square: 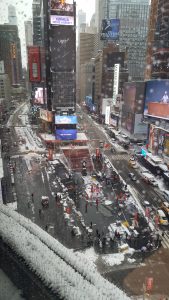 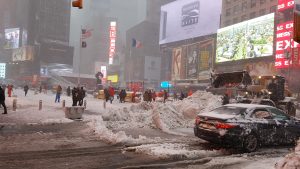 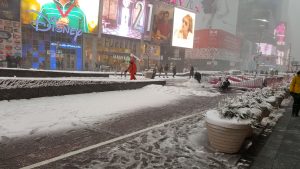 On of the man reasons for this big snow storm, is the (AO), a.k.a. the Polar Vortex plummeted negative, hence all the cold air/storms pooled into the Northeast to produce up to 18” of snow. See graphic below. The cold air, will hang around roughly 5 days or so in the Northeast, as the AO is forecasted to trend positive by Presidents weekend, which will bring warmer temps in NY, and colder in the West. See Below:

West Coast – Again, been one storm after another for the snow/rain weary Californian’s, as this record breaking season shows no sign of letter up. The good news starting yesterday California will be on a roughly 5 day break from any storms, and above average temps, and dry/windy weather will take hold on the Golden State.  Starting this Thursday, things in California will deteriorate  rapidly. Folks, this is the time to get things in order, as the next series of storms cycle will be stronger and colder. If you are near a river/dam,  hillside, and/or body of water that is prone to flooding/mudslides, take precautions, as the next storm cycle could be deadly for the state. Currently, the next storm cycle will start to impact CA by the 16th and 17th. Since that is close to 5 days out, I can’t fine tune a forecast for you until Monday at the earliest. What I do know, is NOAA’s Climate Prediction Center has already forecasted the new storm cycle, as it is currently being directed at Central/Southern California. See the graphic below for the next 6 to 10 day forecast:

As you can see, California is forecasted to have HEAVY RAIN/SNOW!! Furthermore, below is the GFS American Model, forecasting the Asian Pacific Jet  moisure/speed, forecasted to slam right into CA later this week. Notice the high pressure sitting just to the North of Hawaii, acting as a steering wheel for the jet stream.  This next storm system cycle, is no joke: 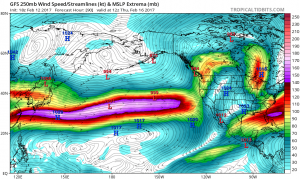 More later tomorrow night, as I can fine tune the details as the big pattern change forecasted slam into California becomes a lot clearer. I will show snow/rain totals, medium range forecast, and my predictions for the rest of the month. What I do know, is this President’s holiday weekend will be very active weather wise in California, and benign on the East Coast.