Welcome to Real Weather Forecast!!! Storms on the West Coast..When will Winter Return to the East Coast???

Welcome to the Real Weather Forecast Website. After years in planning, I finally have broken down and gotten a website to handle the interest in my weather discussions. Emailing it to all of you has become challenging and cumbersome, plus most of you never get them as they went to spam. Well, those days are over, as I introduce you to: Real Weather Forecast. I hope all of you enjoy it!! Special thanks to my web designer Mara, for getting up the site and making it look nice. Mara still will be adding features to it, so look for those in future post discussions. Feel free to comment and/or ask questions. I want to make this as interactive as possible. Now, let’s talk about the weather:

Low Pressure moderate to strong storm forecasted to hit California starting tomorrow, through Tuesday the 7th. The Sierra mountain range will be looking at another 3 to 5 feet, as another AR, a.k.a Pineapple express is poised to hit. Southern California will get the tail end of these storms, with high snow levels around 7500’, and rain below that. Please see the NWS update 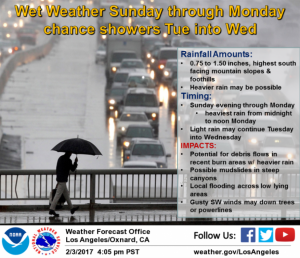 After this storm, high pressure will try to take control of the West Coast and usher in Cold air into the rest of the country. However, this has been a record winter on the West coast so far, it might lose it battle. Another small system comes into California later next week, but since we are out of the 5 day window, it is to early to say how strong it is. What I do know is from the middle of next week until the middle of the month, warm/dry air will be entrenched over the West Coast, and cold/wet weather be over the Midwest/Northeast. This pattern will last until president’s weekend. At that time, things will drastically, as you can see in this image below from the Climate Forecast System, a.k.a. CFSV2: 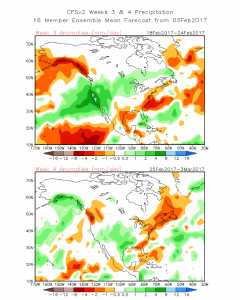 This is not a forecast, it is a change in the climate pattern. As you can see, California is going to get nailed again. For those of you who haven’t fixed your roofs (you know who you are), DO IT NOW!!!

Here is the CFSV2 Temps: 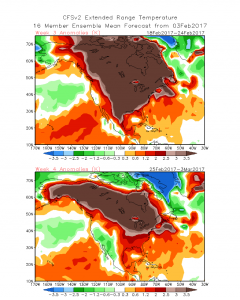 As you can see, this is the temperature forecast. It is going to be in the 50’s in the Midwest and the Northeast, whereas on the West Coast, it is going to be below average in temps. For those of you who want to know why…….read on…….

This has been an interesting Winter to say the least. As I discussed last week, most of the Weather/winter of 16’/17’, has been focused on the West Coast. The Midwest and Northeast hasn’t had the winter that they are accustomed too. This is due to serval factors called: Teleconnection patterns. They are the Artic Oscillation (AO), a.k.a. the Polar Vortex (PV), the Pacific North American (PNA) & the North Atlantic Oscillation (NAO). When the AO is positive in the winter, most of the cold air stays in Canada and filters down to the West Coast. When the AO is Positive, the PV is non-existent, as most of the country has above average temperatures throughout the time frame. When the AO is negative, then a majority of the country will be under artic weather, with the exception of the West Coast. The last 5 years, the AO has mainly been negative, which has been the reason most people back east have stayed in Florida longer. However, this winter mother nature has written a different story. See the AO graphic below:

As you can see, the black line for the AO happened in the past, and the red line is forecasted. The AO has been positive since December 1st, which is amazing. It is forecasted to trend to neutral, then head negative, only to rebound to positive again by the middle of this month. This pattern, along with the NAO, basically operate the same way. With the AO positive and the NAO Positive,  cold air doesn’t get trapped in the Midwest/Northeast, along with Low pressure troughs, and there is no blocking high pressure to prevent the Jetstream from stalling :

As you can see, the NAO has been mostly neutral and positive this winter….and it is forecasted to stay positive into the middle of the month to the end of the month. When the NAO dips to neutral or slightly negative, then the Midwest/northeast is susceptible to storms/frigid Arctic weather. When they are positive, the West coast is more active, and the storms coming off the Pacific Ocean are zonal, and don’t get stuck.  Usually when the PNA index positive, the west coast in under high pressure and the east coast is under cold/wet low pressures. However, this winter has been different, as the +NAO & +AO have neutralized the +PNA from providing High pressure on the west Coast, and given it the opposite…….record snow fall/rain!!!! See below:

As you can see, most of the first half of January was negative and then it went positive to neutral. Now the index is forecasted to go positive and then crash at months end…….hence, the 2nd of February In California will be very active!!!

More later, but folks in California……..be prepared the 2nd half of this month.

In closing, one of readers (Dan) asked me the following question:

Q: Do those reservoir levels reflect current water in the hole or future usage and result of snow melt?  How do those factors effect whether or not drought conditions are resolved?

A: Dan, although I am not hydrologist, I do know that reservoirs levels are used for future usage, for consumption, irrigation, and other means. 5+ years of record drought in Southern California has taken its tolls on the reservoir, their levels, and our ability to irrigate and consume water like we did 10 years ago. For the drought conditions to be resolved, the reservoirs need to be at least 75% and above for there to be normal conditions. Currently, we don’t have one reservoir in So Cal that is above $20%. Notwithstanding, this doesn’t apply to the ground water in holes, and wells, which have been basically dry for the past 1 or so.

Feel free to comment, and/or ask on the blog format below. Next discussion will be Monday night.